Competition amongst members of a remote team can have both positive and negative consequences. When team members engage in healthy competition, they are able to inspire one another to perform at their best. However, too much inter-team competition can breed an “every man for himself” mentality within the group. The key is to find a balance so the team can reap the benefits of being competitive without sacrificing its cohesion.

As mentioned above, competition within a team leads employees to motivate each other to reach their highest potentials. When competition is occurs naturally in a team, as opposed to being forced upon a team by an outside force, employees are pushed to outperform their colleagues based on their own intrinsic desires to do so. Such competition will produce a team of high-achievers who challenges each other to do better. It also fosters self-accountability, as employees will want to keep track of their own progress to see how they’re doing in comparison to their team members. Aside from organically-created competition, the promise of recognition or reward from management is a motivating factor for employees that encourages healthy contention within a team.

In her article “Get Rid of Unhealthy Competition on Your Team”, Harvard Business Review contributor Amy Edmondson discusses how we have been conditioned from a young age to have a competitive mindset. Whether it be for admission to prestigious universities or for coveted jobs at top companies, we are constantly trying to outdo our peers so that we can succeed as individuals. However, it is this mindset that inhibits teamwork and team cohesion. Without cohesion, team members are subject to feelings of isolation and disengagement. Consequently, these feelings can cause high employee turnover rates within an organization.

Often, we achieve success at the expense of others’ failures. We will even go as far as to withhold information that would help others (including our teammates) get ahead so that we can reach our own personal goals. It is this type of self-preservation that drives us to outshine others, causing the success  of the team as a whole to suffer. 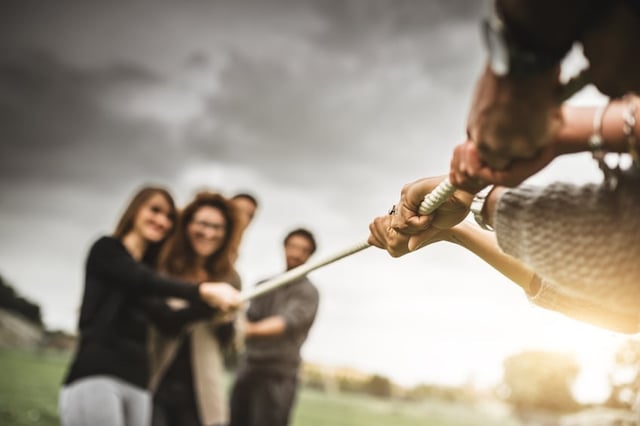 Instead of having team members compete against each other, managers should strive to make employees compete against other teams and organizations as single unit. This can be accomplished by establishing unified goals for all team members to work towards. This allows camaraderie and trust to develop within the team, as everyone is trying to attain the same results. Moreover, employee-to-employee coaching and collaboration is supported when team members have common goals; colleagues will start to see each other as resources for help instead of as threats, Edmondson advises. When employees think collectively instead of only for themselves, the team’s output is greatly improved and it is able to operate as a cohesive unit. When such cohesion is present, the team can compete against, and outperform, other internal teams or external organizations.

In order for a team-oriented mindset to exist, managers must make a deliberate effort to promote this type of thinking. Edmondson suggests defining success as something that is shared, rather than personally experienced. She also recommends rewarding team successes as opposed to individual accomplishments. Managers need to stress the need for the diverse perspectives and skillsets that teams provide. Furthermore, managers should emphasize to their teams how much more can be accomplished as a group than as individuals working separately.

Managers can prevent inter-team competition being too fierce by highlighting the need for group cooperation and rewarding team victories. When competition is balanced, the team’s potential can be fully realized.

81% of brands are frustrated with their ability to drive execution in the store. In this guide we show you how to find the execution opportunities that move the needle on sales.

The IT Leader Checklist: 3 Must-Have Requirements for a RetEx Platform in Today’s Climate

Has the last 18 months had your team feeling like your current visibility and control over your company’s retail execution is limited? Inflexible? Have any Sales or Marketing business leaders..

Salesforce vs. Retail Execution Platform: Why Your Field Team Needs Both

What’s one of the most common barriers to success we hear when talking to CPG brands about their technology stack? “Our field team is using Salesforce's CRM to stay organized in the field.”