Your Guide to Startup Valuation in the CPG Space

After a few months in business, your brand has found some traction in the marketplace. Your products are being sold at local farmers’ markets or retailers in your community - you’ve gotten a taste of success and are ready to company to the next level with a round of series A funding (woo-hoo!).

Before you can approach investors, you’ll need to determine the valuation estimate of your business. Unfortunately, there is no magical formula for company valuation, since there are many variables at play that affect how much yours is worth.

While the tech startup model might be tempting to follow, it’s important to remember that CPG startups operate very differently, and therefore require a different to valuation. Otherwise, early-stage companies could put themselves at risk for unnecessarily long fundraises and upset investors.

Below, we’ll examine three pre-money startup valuation methods and discuss their pertinence within the CPG industry.

In affect, valuation multiples are ratios of capital investment to financial metrics that are traceable to providers of that capital - such as  EV/EBITDA: the ratio of Enterprise Value to Earnings Before Interest, Taxes, Depreciation and Amortization. By comparing your company’s metrics to similar brands’, you’ll be able to generate an informed hypothesis of your valuation.

The first step of a comparable company analysis is to create a peer group: that is, a list of companies in your industry that are roughly the same size as yours. This step will involve some research - talk to industry experts and use the web to figure out who to include in your peer group. Ideally, you should come up with a robust list of at least 15 companies to analyze. Try to be as specific as possible in terms of industry. For example, kombucha companies should choose other functional beverage companies (as opposed to food and beverage companies in general), while hair gel brands should look toward other hair care companies (rather than all health and beauty companies).

Once you’ve assembled a list of companies, identify the ratios you’ll use for comparison. In the world of consumer goods, valuation is a multiple of net revenue, according to CircleUp founder Ryan Caldbeck. Additional multiples to investigate include enterprise value to sales (EV/S), price to earnings (P/E), price to book (P/B), and price to sales (P/S).

You’ll want to take a look at these multiples over the last 12 months (LTM). Pay attention to when each company in the peer group raised money, as this will affect the worth of the valuation multiples. You can extrapolate this data from a number of online databases relevant to the CPG space (find an example of such a database here and here).

After obtaining your data, arrange it in an easy-to-read spreadsheet. Incorporate mean, median, minimum, and maximum statistics for each multiple, so as to provide a comprehensive valuation range. A basic rule of thumb to remember is that if your company’s valuation multiples are higher than the peer averages, it is overvalued. Conversely, if they are lower than the peer averages, your company is undervalued.

Venture capital valuation enables you to take the investor’s viewpoint into account, a critical consideration when attempting to fundraise. It operates under the following principle:

Terminal value is the anticipated selling price of your business in the (somewhat) distant future. To estimate your terminal value, use industry statistics and your company’s historical data to predict your revenues and earnings in the year you project your brand will sell. Researching how much CPG companies typically sell for can help you land on the most accurate figure possible. Other useful factors to analyze are same-store sales growth, gross margin, market opportunity, brand strength, and management strength.

Investors’ target ROI will depend based on the nature of the investment. For example, private angel investors typically expect a 30-40% return, whereas venture capital firms seek a higher return  because they assume a higher rate of risk.

To see how the equation functions, let’s look at a quick example using sample figures that are realistic in the CPG startup world:

The equation becomes a little more complicated when adjusting for dilution, but that step is usually not required for early-stage companies looking to raise their first round of capital. If your business is facing dilution, you will need to reduce your pre-money valuation by the estimated level of dilution from later investors. For the sake of our example, let’s assume that investors in this round are anticipating 30% dilution.

It should be noted that while this method is effective for anticipating investors’ thoughts, it does not always produce the most accurate results because it relies heavily on guesswork.

A third way to identify your company’s pre-money valuation is by using the Berkus Method, which determines valuation by examining five key criteria for startup success. This methodology can be especially useful for young businesses that are not yet generating revenue.

It does presume, however, that the business being valued has the potential to attain $20 million in revenue within a 5-year period. It also does not allow for pre-money valuations over $2 million.

The Berkus Method uses five criteria to determine a company’s worth its: sound idea (basic value), prototype (technology), quality management team (execution), strategic relationships (go-to-market), and product rollout or sales (production). According to the Berkus Method, each of these categories can contribute up to $400,000 to a company’s total valuation, yielding a maximum post-rollout value of $2 million.

To calculate your Berkus Valuation, estimate the value your company holds in each of these categories then add.

Here is a visualization how it works in practice: 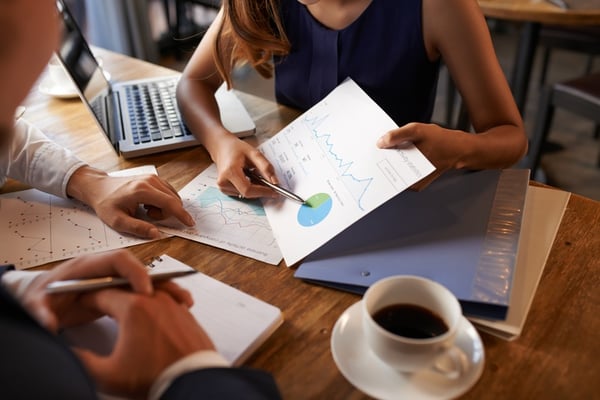 The Golden Rule of Valuations

If there’s one single piece of advice we could leave you with, it would be this: DO NOT OVERVALUE YOUR BUSINESS!

This is the only way that you can truly get valuation wrong. There are dozens of articles out there written by seasoned investors that hammer this point home.  If one investor feels that your valuation is too high, word gets around to other investors. This leads to long, drawn out fundraises that make your business unattractive to potential investors. No one wants to buy the stale cookie that’s been lingering behind the counter for hours. The same goes for your startup.

Let’s say your startup is in fact able to get the funding it needs. This might seem great in the short-term, but if you’re overvalued it could prove tragic in the long-term. If your company can’t meet its growth projections, it becomes nearly impossible attract investors in future funding rounds when the valuation needs to be higher than it was in the first round. Some investors may be willing to participate, but not at the valuation you’re asking for, causing your existing investors to be upset and lose confidence in the business (uh-oh).

Other Factors to Consider When Valuing a Business

Calculating valuation is hard work that requires time, research, and a lot of unknowns. While company valuation is certainly important, don’t get too hung up on being ultra-precise - it’s almost impossible to make foolproof projections when a company is in its infancy.

There are many different determinants that investors consider when evaluating deals, such as management team strength and market potential. Further areas of concern for CPG startups include whether or not the product is on-trend and in line with consumers’ lifestyle aspirations, the company’s command on IoT, the presence of repeat customers, brand differentiation, growth targets, and gross margins (which should be 40-60% in most categories), reported Collaborative Fund investor Sophie Bakalar.

It’s also never a bad idea to experiment with several methods of valuation. If you come up with drastically different valuations after using three or four methods, then the numbers you’re working with may be off. On the contrary, if your valuation is always approximately the same, then you’ll know you’re on the right track. Plus, using a few methods can also prove helpful during negotiations.

Retail Audit Checklist: 37 Advanced Metrics to Track at the Shelf

For CPG companies selling at retail, retail audits are an important part of maintaining a strong shelf presence. This checklist covers 37 different metrics that you're reps should be measuring..