Repsly is proud to celebrate our 10th year in business providing retail execution to thousands of brands that record more than 5 million activities per month.

Since our beginnings in 2010, we've aimed to make a positive impact on the lives of our brands by empowering field teams to achieve peak performance in the field through data-driven insights, visibility, and control about their execution at the point of sale.

"The achievements of our company over the past decade are the results of the combined efforts of every individual that is part of it," said Repsly's CEO, Matthew Brogie. "While it’s been a challenging year for many companies, we felt it was important to acknowledge the significance of this milestone that only a third of tech companies are fortunate enough to reach. It validates that our brands and employees believe the work we do is valuable."

In the past 10 years, technology in the retail industry has seen tremendous growth: manufacturers began collecting data on their execution at the point of sale, and retailers started using sales data to build relationships with vendors. As the amount of data continued to grow, making sense of the siloed datasets became more challenging and time-consuming. In that time, Repsly grew the solution to focus on improving sales by combining three main sources of retail execution data – brands’ sales, field activity, and in-store execution data – to offer a unique view of the impact in-store activities have on sales.

But before we talk about where we are today, let’s look back at the important and memorable highlights from the first 10 years of Repsly that shaped who we’ve become.

Repsly is now a global tech company with headquarters in Boston, Massachusetts, and an additional office in Zagreb, Croatia, and is used in more than 82 countries, but like many companies, Repsly had humble beginnings, as well as a different name!

The product was born in 2010 in Zagreb, out of a need for a service combined with an opportunity for expansion. At the time, co-founders Marko Kovač and Marko Linke were working as software developers when they were approached by L’Oreal to build a solution that could keep track of its outsourced distribution.

L’Oréal was using third-party distributors in the Adriatic region, so it was difficult to see what was happening to their products after they reached warehouses. The two Markos recognized that there was a huge market for this kind of solution for many brands similar to L’Oreal. And rather than building a custom software solution, they spent time developing a multi-purpose, adaptable product under the stipulation that L’Oréal would sign on as the first customer of their new company, Salespod.

After the product proved to be successful for L’Oreal, word spread like wildfire and several other cosmetic brands across Europe adopted Salespod. In 2011, the dawn of cloud solutions for businesses, Salespod underwent its first redesign and launched its first mobile app native to the iPhone and Google Marketplace.

At this point, with plenty of customers in the beauty & cosmetics space, Kovač and Linke aimed next to crack into the food and beverage industry. By 2013, their aspirations for the company had grown even larger as they searched for investors and set out to sell the product internationally, focusing on the huge retail markets in the United States.

During the process of finding investors, Kovač was introduced to Matthew Brogie (our current CEO) who at the time was a consultant with experience in the mobility space. After hitting it off, they began pitching several groups of investors and, ultimately, secured a deal.

After our first round of funding in May 2014 with Launchpad and FirstBev, Salespod changed its name to Repsly and officially opened the new headquarters in Boston. The current Boston office is located at 55 Summer Street and is now home to the sales, marketing, customer success, and finance teams.

How has Repsly’s mission changed over the past decade? The company began as a workforce management solution serving many industries, and over time has honed in on the retail execution market, where it’s particularly strong in the food & beverage and health & beauty categories.

In 2015, Repsly had grown to $1M in ARR and established itself as a productivity tool for SMB field teams. Key features that launched that year included visit scheduling, branded reports, OpenAPI integration, and international versions of the product.

Just two years later, Repsly had narrowed the mission to focus on productivity for mid-sized CPG field teams. Features including time & mileage tracking, route optimization, alerts & branching within the forms module, and the MySegments planning module all launched around this time.

After officially being named the CEO in 2018, Brogie shifted the focus of the company to sales and growth, as many of the departments including sales, marketing, engineering, and customer success began adding new team members. That year also featured some big product enhancements and integrations. With the launch of Repsly’s Advanced Reporting module and point-of-sale (POS) data integration capabilities, the solution was now capable of solving the major challenges category-leading, global CPG manufacturers and brokers face every day.

The Power of Now

Over the years, Repsly has been used as a data collection tool, and our logo somewhat reflected that capability. As we continue to celebrate the incredible milestone that is a decade of Repsly, we felt it was time to give the brand and logo an update to better reflect why we’re still standing strong after 10 years: Our commitment to empowering field teams with the data they need to work smarter every day.

The centerpiece of Repsly’s core functionality is the interconnection of data, and it’s always been about the data. With Repsly, brands can use data about their sales velocity, team activity, and in-store execution to make more informed decisions about where and how they deploy their field teams to maximize their impact on sales. Our logo now reflects that intersection of data points from every part of the business.

The blue, yellow, and teal dots are representative of the three main sources of retail execution data (Activity, Observational, and Sales). Together, these three types of data give CPG sales and marketing organizations a complete picture of how their products are presented, sold, and supported in all of their accounts, shining a light on how and when brands can deploy their field teams to have the biggest impact in the store.

And we’re not done yet; we’re still constantly evolving to meet the needs of the retail industry. For 10 years, we’ve provided best-in-class solutions to CPG field teams all across the globe. Through conversations with customers like you, we realized there were complex needs across your brand that Repsly could help solve.

It’s been an incredible journey so far, and we’re already looking forward to the next 10 years of Repsly. Where will we be? Who knows. But we know for sure that it’ll be equipping brands with the tools they need to make data-driven insights to achieve peak performance in the field. 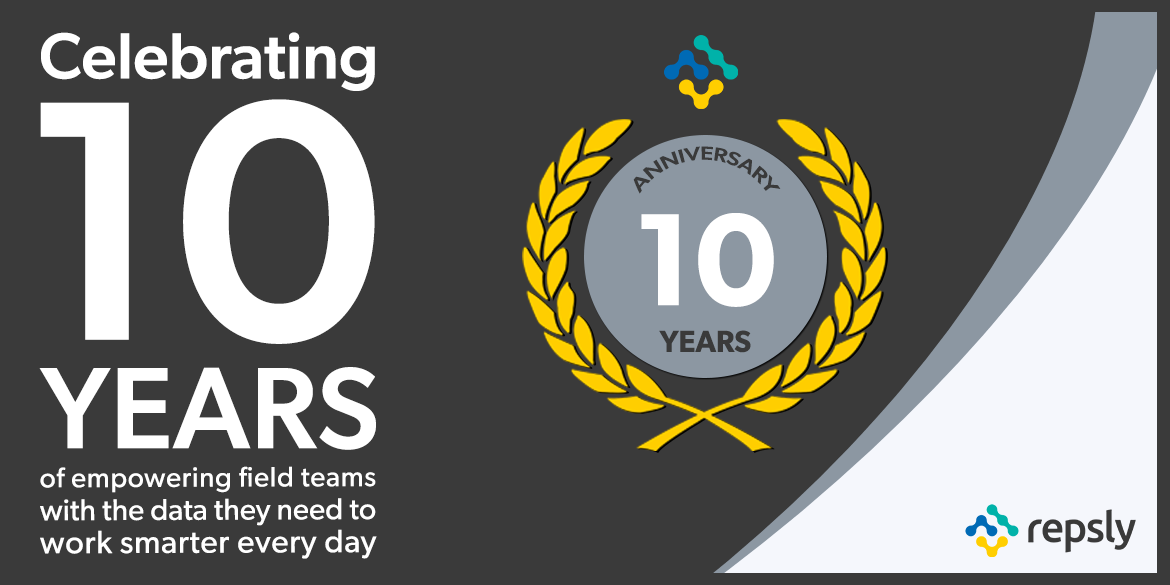 Ben is Repsly's content marketing manager, focusing on digital storytelling through blogs, video and podcast production, and social media. He recently served as Bullhorn’s senior content marketing specialist and is also the founder of InVision Media, a video production company that helped small businesses promote their message. Before joining the workforce, Ben was the captain, president, and social media manager of the men's ice hockey team at the University of Maryland. In his spare time, he enjoys rollerblading with his dog Chewbacca, watching the Boston Bruins, listening to classic rock, and playing competitive games of Settlers of Catan. Follow Ben on Twitter: @bennybyline.

If you missed our webinar on “How Kraft Heinz and Relentless Trade Achieve Success,” fear no more! We’ve recapped last week’s conversation which gave an inside look at how these two CPG industry..

Most consumer goods companies understand the importance of an effective sales territory management plan - it can prevent territory overlap between field reps, which causes confusion and wastes..

In the retail world, there’s no merit in scoring shelf space if you’re not able to keep it. That being so, retailers often conduct category reviews, where you’re given the task of proving your..