In one form or another, chances are almost everyone you know starts their day with coffee - be it home-brewed, bottled, or purchased hot or iced from a coffee shop. As longstanding as its popularity may be, the coffee industry is in the midst of a rapid change. As millennials' fast-paced lifestyle becomes ubiquitous, consumers are preferring to get their caffeine on the go. In turn, retailers are experimenting with novel ways to speed up ordering and get busy shoppers back in their stores.

Here are the five coffee industry trends that will dominate 2017:

As of last spring, Millennials have unseated Baby Boomers as the largest living generation, according to U.S. Census data. This younger generation is more social and mobile than any other to date. As a result, coffee consumption has moved from the privacy of consumers' homes to more public venues, and is then compounded by social media.

With that in mind, millennials have come to value different aspects of their coffee than their parents. Since many older generations drank their coffee in the comfort of their own homes, they focused on the price of the coffee they were drinking. Millennials, on the other hand, are more focused on experience rather than price.

Here's how to capitalize on this trend:

It is no secret that we live in a fast-paced world, or that it's getting even faster. That means that people want to have their coffee ready to drink as soon as possible. In this environment, the canned and bottled ready-to-drink coffee market reached $2.4 billion in 2015 and has only continued to climb, Bloomberg reported.

One reason RTD coffee may be taking off in 2017? The falling popularity of soft drinks in the U.S. and beyond. "It is probably not a coincidence that canned or bottled ready-to-drink cold coffee is catching on at a time when fewer are drinking carbonated soft drinks, including the caffeinated colas," said Karen Bundy, V.P. of Food & Beverage Marketing at Multi-sponsor Surveys in a press release.

This movement has inspired some of the coffee industry's biggest players jump in to the RTD arena. In September 2016, Dunkin Brands announced it would be partnering with Coca Cola to bring a new line of cold coffee beverages to retail in 2017.

With ready-to-drink coffee making it easier for consumers to get their caffeine fix on the go, some retailers are trying to get coffee drinkers back in the store with nitrogen infused coffee. Nitro coffee is poured from a tap and provides a similar mouthfeel as a beer (think Guinness). The foamy and creamy texture allows brewers to rely less on sugar and milk to cut coffee's bitter taste, which is appealing to the more health conscious coffee drinker. Plus, the texture is incredibly difficult to replicate in an RTD format, giving coffee shops something to offer millennial consumers looking for unique drinking experiences. 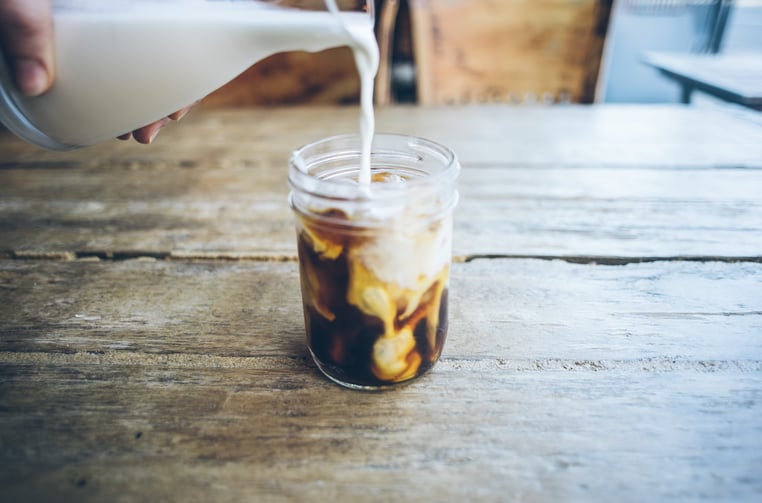 4. Out With Iced Coffee, in With Cold Brew

Iced coffee has long been the go-to for consumers looking for a refreshing pick me up in the summer months or even just an extra kick of caffeine, but this is starting to change. Cold brew coffee has exploded in popularity over the last several years, and 2017 should be no different. Cold brew sales jumped up 580% between 2011 and 2016, according to a Mintel report. While a large part of these sales has been at coffee shops themselves, plenty of retail brands are also adding cold brew products to their lineups.

Here's what separates cold brew from the more traditional iced coffee: Iced coffee brews just like standard hot coffee - it uses heat to extact flavor, sugar, oils and caffeine from the coffee beans. Then, that coffee is chilled and served over ice. The cold brewing process uses time, rather than heat - soaking beans in water for 12 hours or more in order to turn water into coffee.

5. A Shift Toward Specialty

Overall, as shoppers prioritize experience over price, consumption of gourmet and specialty coffee beverages is on the rise. Out of the $48 billion U.S. retail coffee market, about 55% of spend will go toward specialty coffee next year, the Specialty Coffee Assoc. of America found. Even for brands that have not traditionally operated in the specialty space, opening up a luxury line could pay off in 2017.

81% of brands are frustrated with their ability to drive execution in the store. In this guide we show you how to find the execution opportunities that move the needle on sales.

Tyler Hubbell is a content marketing specialist at Repsly. His expertise is in creating useful content related to customer satisfaction and building relationships. Tyler enjoys golfing and reading.

What's in Your Tech Stack? Highlights From Industry Thought Leaders

The IT Checklist: 17 Questions to See if Your Retail Tech Stack Measures up Today

Has the last 18 months had your team feeling like your current method of overseeing your company’s retail execution is old and antiquated? If so, you are certainly not alone.

At Repsly, we’re emphasizing customer outcomes in 2022 highlighting the many ways our customers are recognizing the value of their retail execution platform. Once a month, we’ll be putting a..

By now, brands and retailers are way too familiar with the pains of finding and keeping field workers. As this seemingly never-ending labor challenge fast approaches its third year, it's paved the..